Not only in the Olympics this year. Two Japanese graffiti artists, Kami and Sasu, took part in a major project in Milan with 5 other artists. Check out the link where you can zoom in on the canvases.  From Wooster Collective.

When writers sell out?

Questions on graffiti and authenticity are spinning through my head after reading the comments from this post on British stencil artist Banksy. One of the comments questions the authenticity of Banksy sightings because apparently anybody could be Banksy now, as pre-cut stencils are being sold on ebay for about 5 dollars. Another comment questions “Wheres (sic) the art in doing someone elses design?”

Good question. Of course there are art historical precedents of appropriation, etc. But what happens when you appropriate in an anonymous art form? These “fake Banksy’s” don’t stand to gain any recognition for their stencil efforts. They are not showing their appropriated Banksy stencils in a gallery with their own name on them instead. It seems instead that Banksy is getting up for free here.

Not anyone could design a stencil, but anyone can use it. This is a key difference between a stencil artist and a writer who has a distinct tag that no one else could imitate. When using stencils one erases the connection between the graffito and the artist’s unique gesture. Stencil graffiti, then, invites copy catting. Of course if you’re a self-respecting graffiti writer you wouldn’t want to be caught dead using someone else’s stencil.

But what if you’re a fan? You have no graffiti ambitions of your own, maybe no style or talent. Or you’re lazy and don’t want to try to develop skills. (Check out this LA writer Zato One’s ironic take on this.) Who would stop you from getting THEIR name up? When you look at a Banksy you find in Hollywood, does it matter if it was actually stencilled by the man himself? Because when you look at it, you still think, “Banksy…”

Checking out ebay though, the availability of precut Banksy stencils is pretty low. They aren’t even that cool. The smart comments he is famous for aren’t included in your stencil set. So for the record, if you are looking at what you think is a Banksy, and it is clever, then it probably was done by him, not some poseur.

On the other hand, an artist who fully condones the spread of his work, offers kits for those aspiring legions of copycats on his very own website. Check out the Space Invaders kit, available for 80 euros. “Be an Invader. Stick Your Space. Get Points. Support the Invasion,” flashes across the top of your screen.

Space Invaders supports even further commodification of his trademark pixelgraphic aliens in the form of decals you can put up in your house. Space Invader decals, by Blik, are even available at mega mart Target.

Space Invaders are on their way to becoming a sign as recognizable as Nike. I wonder if, in time, our children could look at the lovable aliens and not even know anything about its origins? Will the aliens outlive their anonymous French creator? Is there anything wrong with wanting one’s art to outlive oneself?

Maybe the days when getting up worldwide was a personal ambition, a way of documenting your travels and getting recognition in far away continents, maybe that’s old school now. Could delegation be the future? A worldwide force of lackeys who get up for you?

Well check it out, this sort of stuff’s been around since 1989 when Shepard Fairey started the Andre the Giant campaign. And graffiti is still going strong; it hasn’t changed anything really.

It is all up to the individual writer, where his or her priorities lie. An artist like VeryOne, who travels all over Asia getting up puts the emphasis on the journey and the proliferation. For others, like Space Invaders or Obey Giant it is the movement that matters. The symbol supercedes the creator and is proliferated by others.

Whether this is Banksy’s intent is debatable. The stencils on ebay are probably bootlegged, but I don’t know if that is really going to cause Banksy much consternation. After all, the old adage “imitation is the sincerest form of flattery” probably rings true at this point. Banksy says

The time of getting fame for your name on its own is over. Artwork that is only about wanting to be famous will never make you famous. Any fame is a by-product of making something that means something. You don’t go to a restaurant and order a meal because you want to have a shit.


People copy it because it means something to them. They like it. They’re fans.

If you want to see what Japanese graffiti looks like… 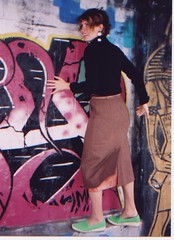 There is a Japanese translation of my article, “The Bombing of Babylon,” currently in the works thanks to Ian Lynam, a graphic designer who lives in Yokohama. Susan Farell, the editor of Art Crimes, forwarded him my research, and it turns out that he had also attended the Mito exhibit and taken some photos.

In turn, Ian read my article and offered to have it translated by one of his contacts. In such an understudied field as graffiti research it is great to see a network of willing participants who put forth their time and effort without the backing of grant boards or arts councils, getting the information out there and available for everyone. Thanks everyone!

Last semester I conducted a research project on Japanese graffiti art, which was partly inspired by a major exhibition of Japanese graffiti writers at one of Japan’s foremost contemporary art museums, the Art Tower Mito. The essay I wrote, “The Bombing of Babylon,” is now published and can be found on the Art Crimes website, in their research section. This website is a great resource for photos, articles and interviews about graffiti from around the world. Especially if you7ve never given graffiti much of a chance, please check it out! It might just change your view of this fascinating art form.


You are currently browsing the archives for the graffiti category.