truly the best site on the net.

For those who haven’t heard about it, 43 Things is a website on which users (try to) post up to 43 desires to create a community based upon these common wants or dreams.  The 43 things can be anything ranging from skydiving to fixing an old car, from having children to getting a new job.  Anyone can search through the website to explore what kind of people are out there with what kind of goals.  I was browsing through the section of people who wanted to study abroad–since I am studying abroad and probably would have a lot in common with these people–and I came across one user who had a “thing” that inspired me.  So, I added, “I want to witness an exorsism,” to my growing 43 things.  But, I went back and reread her “thing” and realized that our goal is not one in the same: while I want to witness an exorcism, she wants to be witness to an exorcism [sic].  Anyway, if anyone knows how I could do that, let me know. 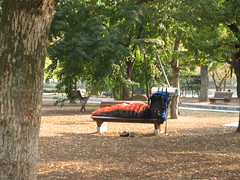 I want to do this some time, travel around backpacking, sleeping on park benches. It’s the life for me.  But I wonder about his shoes–is someone going to still his shoes?

I’m currently reading The Magus by John Fowles, and I came accross an interesting conversation between the protagonist, Nicholas, and a mysterious man who had just told the story of how he diserted the army in World War II:

“You are not ashamed to be the guest of a traitor to his country?”
“I do not think you were a traitor to the human race.”
We moved towards his bedroom windows.
“The human race is unimportant. It is the self that must not be betrayed.”
“I suppose one could say that Hitler didn’t betray his self.”
He turned.
“You are right. He did not. But millions of Germans did betray their selves. That was the tragedy. Not that one man had the courage to be evil. But that millions had not the courage to be good.”

This is why I want to write novels, so I don’t have to say things and get in trouble for them–instead, I’ll have characters say things. Then, it won’t matter; it’s all fiction, and the characters who said whatever offensive thing doesn’t exist. I think I’ll also use a pen name to keep myself out of harm’s way.

Possums are cute.  But opossums are ugly, nasty, piggish fiends.

Filed under: Uncategorized — jdoolittle @ 12:51 am

This is interesting: if you google (yes, that’s a verb) “James Doolittle,” you’ll come up with a whole bunch of results for General James H. Doolittle, who was an aviator popularized for leading the first American counter-strike against the Japanese after Pearl Harbor in World War II (Alec Baldwin played him in the movie Peal Harbor). I’m mentioned somewhere on page three.

But, if you google “James Doolittle alcohol,” my blog holds not only the first hit, but also the second.

The question is, do I have a drinking problem, or is James Doolittle just such a unique name that only one of us is mentioned on a website also containing the word alcohol? (Should I mention that I’ve been drinking tonight?)

Maybe the real question should be who was it out there that initially linked my name to alcohol in a google search, thus alerting my shortstat plugin to the fact that such a reference was out there?

Heading off to Shiga

I haven’t done much blogging the past few days, and it’s because I’ve been doing work (yay!).  I learned a song on the guitar for the EAC talent show, did all of my work for all of my classes, nearly finished the fantasy novel I’m reading, and I even started writing my Junior Research Project!  And now I’m going to head off to Shiga for a weekend full of awkward moments in which I’ll wish I knew more Japanese.  Take care, my homies.  Take care.

Chan Chee Khoon, Z Online Magazine writer, evaluates Japan’s economy in relation to the privatization to come of Japan Post, Japan’s government-run postal system, in his essay “Neo-Liberitarianism vs. Communitarian Capitalism: Japan’s Dilemma.” His argument, after introducing the private banking industry’s demands on breaking apart Japan Post and how it falls in line with Prime Minister Koizumi Junichiro’s political platform, proposes that the plan of a “neo-liberal remedy could very well prove to be worse than the disease that it seeks to cure.”

The threat of privatizing Japanese governmental institution came up in the early 1980’s when the Diet passed a bill to dismantle Japan National Railways. In 1987, Japan’s national railway system was given up as a government institution to governmental subsidiaries and, eventually, to private industries. In the private market, the train system improved in efficiency, efficacy, and accessibility: more people could rely on trains to reach more locations on time in the liberalized transportation market. Train companies were appointed and forced to compete with one another, producing companies cornering certain markets—high speed trains, local service trains, intra-prefectural trains. People who needed to reach far off locations in a short amount of time, for example, could take a more expensive line from a company specializing in that specific train-need. The issue of privatizing government run-institutions in Japan has reemerged into the buzz of Japanese economic discussion for the past few years given Koizumi’s platform and historical promotion of privatizing the post system, but in a more socio-political realm given the nature of the postal system.

Japan Post’s function serves not only as a means of delivering and shipping letters and parcels throughout Japan, but also acts as a national bank complete with financial services ranging from commercial loans to home mortgages. Because of its role as a “financial institution with assets of about ¥386 trillion,” Koizumi’s plan for the government to “gradually divest itself of all stakes in the banking and insurance companies, and retain control over only the delivery and branch operations of the privatized entities,” holds greater socio-economic effect on Japan’s evolving politics than privatizing the rail system ever did. In its 25,000 branch offices, JP holds 30% of the nation’s individual savings deposit and “Kampo, Japan Post’s life insurance scheme, has assets of about ¥121 trillion, some 40% of the national total [for this market].”

Khoon cites from an article in the Economist magazine expanding on the social ramifications and economic results of such a move:

With Japan’s private banks struggling to boost profitability, the last thing they need is a collection of big government lenders — backed by explicit and implicit subsidies — depressing lending rates and competing with them for business, although, unlike the [Government Housing Loan Corporation], Japan’s other eight [Government Financial Institutions] are also serving some borrowers which no private bank would touch…

The point being that the introduction of a neo-liberalist reformation—specifically introducing government subsidiaries that would participate competitively in the financial market—would result in economic disparity for individual citizens relying on government loans as well as private financial companies that would not be able to compete with government-subsidiary-based private businesses.

Khoon presents a persuading argument that the resulting economic destabilization that would occur from breaking up and privatizing Japan Post, would disenfranchise many Japanese citizens and cause bankruptcy in already existing private banking companies; however, Khoon is calling into question Koizumi’s economic plan based primarily on its social consequences and claims that economic disharmony breeds less growth than economic stability. Economic history and trends dictate that, regardless of social exigencies to come out of any given economic structure, a static social economy will not grow with the same force or drive as will the competition-based paradigm of capitalism.

I was perusing my bloglines when I came across a quote in my Woodmoor Village Zendo feed:

I read this quote in a February 16th post by Nacho, and I thought, hey–that’s true.  As I thought about it more, however, it occured to me that such general statements as this one, wherein all motivation and desire is lumped into one or two categories, make life seem that simple.  That there are only these two opposing forces, and that all of our actions are out of either one or the other.  The more I think about it, I wish this quote were true.  I wish that was all that’s on my mind–whether I should try to improve life or enjoy it–but there’s more on the table than just that.  I understand how someone could argue that all my other priorities stem from these two principals, but it just doesn’t ring true for me.  What do you think about the quote?